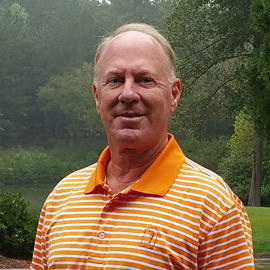 I’ve always taught students there are three reasons why players struggle with ANY bunker shot:

1. Inconsistent impact point in the sand
2. Inconsistent depth of cut (only important in greenside bunker shots)
3. Scared to death because of all the previous bad shots they’ve hit from other bunkers.

First issue is to get over the fear and the expectation of hitting a bad shot. Basketball players don’t expect to miss a free throw, you don’t drive a car expecting to run off the road or worse have a wreck, good business people don’t go into a negotiation expecting to lose. Don’t go into a bunker shot thinking you are going to hit a bad one. Now back to the way to practice and get over that fear.

Get into any bunker and draw a line, about 2 feet long, perpendicular to your target line, now make practice swings WITHOUT A BALL, focusing on making contact with the sand in front of the line. For a fairway bunker shot the line should be about 2″ back of your front heel. For a greenside bunker shot about the same or maybe closer to the middle of your stance. As you make swings move down the line so you can see each time where you make contact with the sand in relation to the line. It may help it you set about 65% of your weight on your front foot and not shift your weight on the backswing, this will help you stay ON the ball and move the bottom of your swing more forward–hopefully in front of the line.

With a ball when practicing or on the course from fairway bunkers the key is to swing within yourself. Dig in slightly to anchor yourself in the sand, always take enough club to get over the lip and try if possible to take one more club than necessary and make a 2/3-3/4 swing. Do not try to help the ball in the air but rather to strike the sand in FRONT of the ball.