What is your best advice to overcome nerves on the first tee? 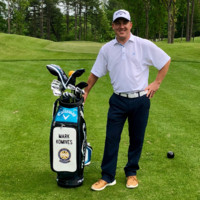 The first thing when feeling nervous is to understand that nerves are natural. I like to say if you’re not nervous, you’re not ready! Second, nerves are just excess energy and normally dissipate on their own. Simply having this awareness alone, paired with the understanding that nerves aren’t something to fret about, can help many players.

However, if a player is nervous to the point he can’t even step foot on the first tee, generally that player needs to redirect his attention. Being nervous normally stems from directing one’s attention on a RESULT. For example, a player who is teeing it up with his boss may be nervous because he is afraid of hitting a bad shot and making double-bogey on the first hole. While such thinking seems logical, the problem is that the player can’t actually control the RESULT of how his tee shot ends up or what score he ultimately makes on the hole. A better strategy is for the player to redirect his attention on what he can fully control, such as the PROCESS of hitting the tee shot. Directing attention on executing the best PROCESS possible (hole strategy, club selection, pre-shot routine, execution, post-shot routine) and accepting whatever RESULT occurs, will normally yield a better outcome anyway. And, the added benefit is if the player directs his attention on the PROCESS of what he needs to do, his attention won’t be on a hypothetical RESULT, thereby eliminating the stressor causing the nervousness.

Take-home message: Nerves are natural. When you’re overly nervous, redirect your attention on what you can control (PROCESS) and have acceptance of whatever outcome (RESULT) follows. If you do, the nerves will dissipate on their own, and you’ll find yourself in an improved mental state to play your best!